Buying canned pumpkin in the UK 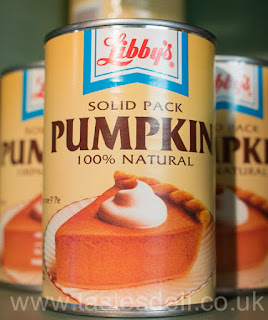 I know it is far too early (and far too sunny) to mention Thanks Giving. But, I also know there are some customers getting a little concerned about their pumpkin pies already. Poor growing conditions in Illinois last year saw the pumpkin yield fall by 50%. Panic set in, with fears that there would be no Libby's Pumpkin for Thanks Giving. Fortunately everything turned out to be OK. There was enough pumpkin to go around.

However, as was inevitable, supply did subsequently run out in the new year. We have customers (mainly American's living in the UK) who visit every summer, and stock up on their Libby's Pumpkin ahead of time. Realising I've not had any for a few months, they are starting to worry. They aren't alone. It'll be September next week and there is still no news from Libby's regarding this year's harvest. How much will there be? Will there be a price increase? When will it be available? No-one seems to know. 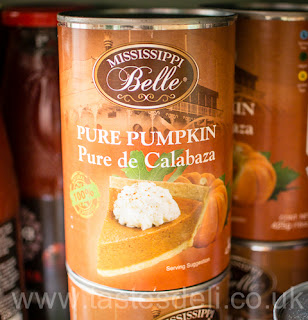 So, to reduce the panic, I've taken a different brand of canned pumpkin, the less well-known Mississippi Belle pumpkin. It arrived this week and I'm pretty pleased with it. Mississippi Belle pure pumpkin is produced in the same factory, on the same line as Libby's and appears to be identical, with the exception of the label. It is still 100% pure pumpkin (no added salt, sugar, colours or preservatives) from Morton, Illinois. Same taste and texture. So far no-one has been able to tell the difference between them. Although it is marginally cheaper.

Hopefully that will put some minds at rest - there will be pumpkin pie for Thanks Giving. It just might not be Libby's.