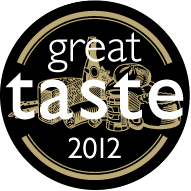 Bessant and Drury were given gold awards for both their lemon and strawberry frozen desserts, when blind tasted with dairy ice creams. An amazing achievement for a dairy free ice-cream.

Teapigs were awarded a collection of stars, including one each for Darjeeling Earl Grey, Jasmine Pearl Green Tea, Mao Feng Green Tea and Chamomile Flowers. Yogi Tea's Choco Tea also won an award. As did a number of teas from Pukka Herbs, and Campbell's Perfect Tea, again! The coffee award winners included another coffee from Grumpy Mule (who also won a three star award and about half a dozen two stars!).

Pipers Crisps were awarded a gold star for both their sea salt crisps and sweet chilli crisps. Olives Et Al also won awards for lots of their olives and their Dukkah.

Our roast ham from Dorset Farms Ham received a gold star. As did Midfields Granola and Chocolate Peppermint Creams from Summerdown.

Lewis & Cooper's Handmade Luxury Fruit Cake again won a gold star, and again will be stocked by us at Christmas. As will the Copas Sage and Onion stuffing which also won an award (to accompany their 3 star winning turkeys)

I think that is everyone, if I've missed you out, do let me know. This year's list of winners didn't include the product names, so its been a lengthy process checking producer names and product descriptions to try to work out what has won. Please forgive any errors or omissions.
Posted by Karen (@ Tastes)