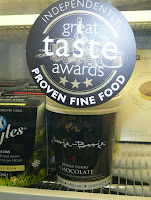 Once again it is award season for foods. And with even more blind tasters than ever the great taste awards announced their winners at last night's ceremony. Booja Booja won one of only 83 three star awards (there were 4873 entries) for their Hunky Punky Chcolate Ice Cream. Anyone who has tried it will know why!

Luscombe were awarded two stars for Organic Sicilian Lemonade as was our (new this summer) honeycomb ice cream from Salcombe Dairy. Olives et al won two stars for their sunshine olives (which we sell loose), and a star for their bags of dangerously moresish Harrisa almonds.

Pukka Herbs clocked up some more awards with their refresh, detox, cleanse and harmonise teas. In the same category Teapigs won a star for their liquorice and peppermint tea.

I'm pleased to see Pollen Organics won awards for their pesto, as I was thinking of offering that as an alternative to the Italian Basil pesto we currently sell. Their chilli and ginger salsa also won an award last year and the salad dressings we currently sell have proved to be a real hit with our customers.
Posted by Karen (@ Tastes)