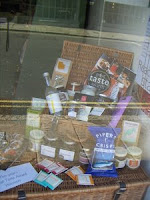 The judging for the Great Taste Awards has been completed and this year's winners have been announced. More than 4500 foods were entered. Each one was blind tasted (some by me!) and judged on its own merits. Fewer awards have been given than in previous years, so it is especially nice to see so many familiar names among the award winners. My local preservers did very well! This was the first time Suzanne had entered and she won awards for both her Hot Banana Chutney and Red Onion Marmalade! And Susie added to the award she won for her Mango Chutney last year, with an award for her very popular Fig Chutney. And the other Susie, won awards for her crumbly vanilla fudge, very cherry fudge and brown sugar maple pecan fudge (I didn't even know she had entered!). John and Mary's Sweet Redcurrant Vinegar was also awarded.

Jules and Sharpie, who have collected numerous awards over the past few years, won some more this year: for their Hot Redcurrant Jelly, Hot Pear Chutney and Hot mmmmarmalade. Tracklements also added to their collection with awards for their Thai Jelly, Spiced Honey Mustard, Horseraddish & Cream, and my favourite, their Onion Marmalade. Stokes, makers of fantastic mayonnaise won an award for their Herb Mayonnaise. Shropshire Fine Herbs won awards for their oatmeal biscuits for cheese and Piper's won awards for both Anglesey sea salt and Sea salt and Somerset cider vinegar crisps. Pukka Teas won awards for their revitalise, refresh, relax and clarity herbal teas and Luscombe for their Organic Sicilian Lemonade. The Nunez de Prado Organic Extra Virgin Olive Oil from Spain also won an award, as did many other Spanish foods including the Date and Walnut bars, 1000 flower mountain honey and creamy Marcona almonds. RJ’s natural licorice was the only winner in the liquorice category.

Even the chilled and frozen foods were judged at the Great Taste Awards and many of our producers excelled. Alder Tree for their Christmas ice cream (which isn't a flavour I stock, but will certainly try now as everything I've tasted of theirs has been fantastic). The Dairy House won two awards for their yoghurts, Trioni for their Strawberry milkshake and Patchwork for their handmade pates. Mike's Smokehouse won another award for their Hot Roast Salmon.

Anila did amazingly well and won two of only forty-six 3 star awards; for her spicy mild and spicy korma curry sauces. Honeybuns won another of the 3 star awards for their deliciously Moorish Almondi cookie.

The regional, national, international and 2007 Supreme Champion will all be announced in September. Here's hoping some of the wonderful producers we stock collect some more prizes.
Posted by Karen (@ Tastes)